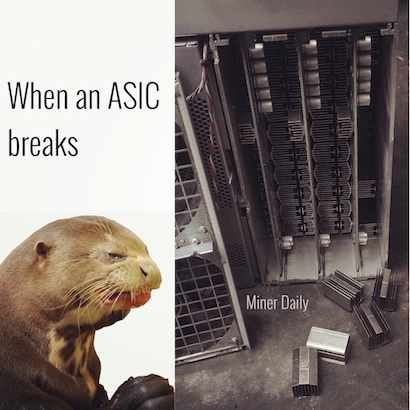 The Antminer 17-series, manufactured in 2019, have amazing efficiency profiles between 39-50 W/TH. And, based on TSMC purchase data, we estimate that a huge number of S17/T17 were manufactured… up to a million. This means that potentially 50 EH/s, or nearly a third of the network, is made up of S17s and T17s.

Because these rigs are not very popular with bitcoin miners. The S17, S17 Pro, S17+, T17, T17+, and T17e machines are unstable due to bad soldering and adhesive glue. As a result heat sinks loosen, machines short circuit, chips burn, and hash boards fail. S17/T17 models are also difficult to ship. They can arrive broken after purchase. They can also re-break upon return from a repair. Thus, it is likely that many are decommissioned.

See below. The miner just touches the heat sinks and they fall off.

In early-2019 Bitmain were excited about the release of the 17-series. The BM1397 chip’s efficiency had improved 29% from the previous BM1391. Bitmain remarked:

At the time Bitmain believed that the they could get this chip down to an efficiency of 30 W/TH. In 2020 they succeeded with the S19 Pro. However, it turns out that having the most efficient ASIC does not necessarily equate to a “better mining experience“.

Whilst the S19s seem to be running OK so far, Bitmain’s poor quality control and workmanship on the S17/T17 lead many to swear that they will never purchase an Antminer again. We have seen this sentiment on both Western and Asian miner forums and social outlets.

Furthermore, some farms refuse to host 17-series rigs because they require too frequent attention. Many ASIC brokers will also not sell S17/T17 because they break in transit, resulting in a loss for both the seller and customer.

So, is there a solution to the 17-series issues?

A New Lease on Life

Next we briefly discuss hash board restoration, hash board replacement, and heat sink refit for Antminer’s S17, S17 Pro, S17+, T17, T17+, and T17e models. Then we share a miner’s experience with S17s.

Hash board specialists found that temperature differentials cause crumbling of the tin soldering on S17/T17 models. As a result, small balls of tin can become lodged in the legs of the chips, leading to shorts and permanent chip damage. Adhesive glue can also dry out so that heat is not properly conducted away from the chips, causing burning. See an example of burnt chips on a T17 hash board below. Also, in the tweet a bit further down you can see a T17 chip which became stuck to the heat sink.

Hash board specialists can restore 17-series hash boards by replacing chips. They can also rework the soldering and adhesive glue. However, these type of repairs can be ongoing, and become costly for the miner both in down time and repair fees.

When a number of chips fail, a hash board will stop working. Thus a miner may opt to replace a S17 or T17 hash board.

However, in most cases the 17-series hash boards are only compatible between machines with the same specs and batch number. Although, flashing the machine with alternative firmware can sometimes help to work around this issue.

Excitingly, in the past few months new heat sink designs became available for the 17-series. This new design promises to restore stability in the S17 and T17 models.

Hash board restoration and heat sink updating costs approximately $250-500 per unit. Repair companies in China are known to perform this procedure.

According to one repair center, the steps to restoring a 17-series are:

The heat sink shapes vary for each of the models. They look like this:

Thus far feedback from miners is that restored S17/T17 machines are much more stable, and can better tolerate shipment. Could we see more 17-series rigs back online in the near future?

Lastly, we tell a miner’s experience with the 17-series over the past year.

That’s all for this time. Be sure to check out our popular article about Antminer S17s and operating climates: Antminer S17 is Temper-mental, as are S19, S9, T17, T9, L3+: Why do Bitmain’s hashboards shutdown in cold and hot climates? How should you fix this?