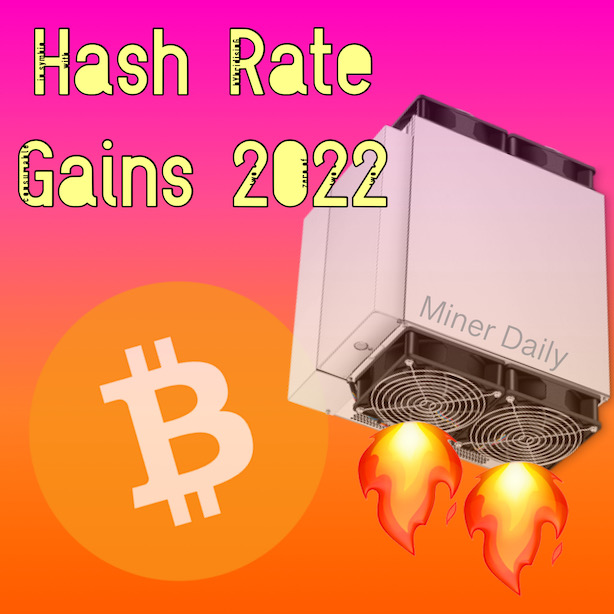 We estimate that BTC hash rate gains in 2022 will lead to a network size between 225 – 270 EH/s. This is based on institutional orders, and predicted ASIC manufacturing trends.

This information is important for bitcoin miners to understand because hash rate changes affect profitability and machine ROI. And, as a bonus, we leave you with a reminder of what the lowest viable $/TH earnings are for the top ASICs on our Best Bitcoin Miner list.

Last January we published a popular article on Bitcoin’s Hash Rate Gains in 2021. Ironically, we simulated the amount of ASICs that North America would need to overtake China’s 55% hash power lead. But, in an unprecedented turn if events, China banned bitcoin mining in June of 2021. As a result over a million bitcoin miners migrated state-side. And, by the end of last year, America’s hash rate share surpassed 35% of Bitcoin’s network and is still growing.

To find out how much Bitcoin’s hash rate will grow this year, we gathered information about orders awaiting fulfillment. Then we worked out a rough estimate of the BTC hash rate gains in 2022 per institutional miner, shown below.

Note that this list may be incomplete or inaccurate. Information below is from media and press releases, and figures are rounded up.

From our data we find that the total estimated BTC hash rate gains in 2022 will be 46 EH/s. But, this figure is probably low. Institutional miners may place additional orders as the year progresses. Also, independent miners and resellers should purchase more miners this year.

On the other hand, due to chip shortages or orders not being paid in full, manufacturers may cancel or delay some of the scheduled batches above. This is known to have happened in the past.

Based on the information gathered in the section above, the minimum rate of miners coming online in 2022 is set to be about 40,000 per month. This means around a half a million miners will be manufactured in 2022. Thus, hash rate will reach at least 225 EH/s.

However, from our report last year we know that up to a million ASICs could be produced in a year. At this rate approximately 80,000 ASICs per month will be released. This equates to an increase of 93 EH/s, giving us a total network size of about 270 EH/s by year’s end.

So, from our analysis above we find that hash rate should be between 225 – 270 EH/s by the end of this year.

Let’s run some numbers and see what happens to bitcoin miner profits with these BTC hash rate gains in 2022.

Limitations: Keep in mind that the following analyses use rates of change, and so are only approximations. They do not accurately portray the dynamics of the difficulty adjustment mechanism.

In the first two simulations we let the hash rate grow to 225 EH/s by December 2022.

Simulation 1 investigates what happens to bitcoin miner profits if the BTC price climbs to $100,000 USD. And, Simulation 2 looks into what would happen if BTC drops to only $10,000 by the end of the year.

In the third and fourth simulations we assume that manufacturers produce a maximum of one million ASICs. Thus, we set the hash rate size to 270 EH/s by December 2022.

In the first two simulations we assume the hash rate reaches 225 EH/s. As a result a miner’s sats/TH would decrease by 20%, from about 520 to 416. Difficulty could reach around 31 trillion.

In the third and fourth scenarios we find that if one million new ASICs are produced and hash rate climbs to 270 EH/s, then difficulty would climb to around 38 trillion. A miner’s sats/TH would fall ~ 35%, from about 520 to 340.

From our analysis we estimate that Bitcoin’s hash rate could range between 225-270 EH/s by 2023. But, because the BTC price is volatile, miner earnings could be anywhere between 3¢-44¢/TH this year, or even higher if BTC exceeds $100k. Lastly, the sats/TH earnings will likely go to around 400 sats/TH or below this year, shown in the results of all of the simulated scenarios.

It is important for bitcoin miners to understand the implications of hash rate growth on profitability, else they may get caught out and not be able for pay power, financing, or other costs. However our $/TH predictions for 2022 vary a lot and may not be very helpful.

So, we would like to share our method of finding a bitcoin mining operation’s breakeven $/TH earnings, based on power costs. If a miner finds that their earnings are nearing breakeven, they may consider selling rigs, securing cheaper power, or upgrading to more efficient machines.

Below are the lowest viable $/TH earnings from the top 20 models on our Best Bitcoin Miner list. We use a power cost of five cents per kilowatt hour (kWh), and ten cents per kWh. For example, if you pay 10¢/kWh, you do not want the daily miner earnings to go below 7-13¢/TH this year depending on which model(s) you run.

For reference, miner earnings in 2020 were as low as 6-11¢/TH for seven consecutive months, could you handle this?

See how to calculate breakeven and machine ROI here.

Check out our article which compares $/TH to sats/TH miner earnings, or read more about our Best Bitcoin Miner in 2021 list.