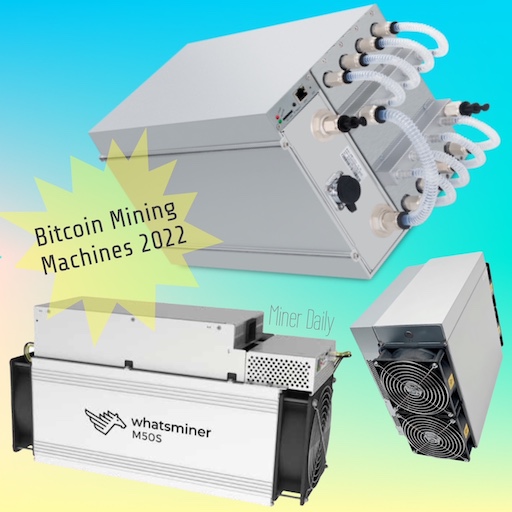 Bitcoin mining rig manufacturers are releasing next generation gear which is up to 29% more efficient than previous models. For the past two years, the most efficient machines ran at 29.5 J/TH. New models will run as low as 20.8 J/TH.

The maximum terahasing power of a SHA-256 miner will also increase by up to 128%, from 112 to 255 TH/s. These engineering feats were achieved thanks to the adoption of TSMC and Samsung 5nm microprocessor chips.

In the following sections we update you on the products that top bitcoin mining machine manufacturers are currently offering. But first, here’s a recap on how the industry’s technology has evolved:

Description of variables: the market leading microprocessor chip in nanometer size per year is in green, the efficiency in J/TH of each year’s best machine is shown in blue, and the maximum achieved hash rate for the leading SHA-256 machine per year is in purple.

Bitmain are the top producer among bitcoin mining manufacturers. Last November at Dubai’s World Mining Digital Summit, Bitmain announced its next gen. S19 XP models. And in January, they announced their liquid-cooled S19 Hydro miner. Bitmain have shown prototypes of both of these models, which employ TSMC 5nm chips.

At the moment last gen. S19s are for spot order on Bitmain’s website, with a maximum of 50 units. All other machines are available for bulk order with longer lead times. Luckily for western clients, Bitmain now manufacture gear in Southeast Asia, which allows for a cheaper import tariff. They also accept both crypto and fiat for payment, and sell dedicated Litecoin, Zcash, and Dash altcoin miners.

Bitmain are still fulfilling backorders from 2021, but the following models are available on their website:

Bitmain’s first iteration of a fluid-cooled miner was the S9 Hydro back in 2018. It ran at 18 TH/s at 2kW, and came with a radiator to disburse heat. But unfortunately for smaller miners, the new S19 Hydro models are only intended for industrial use. They will require over 5kW each per hour.

The benefits of the new hydro models are that they have no noise or fans. A dedicated ANTSPACE HK3 container can also be purchased. The container can rack up to 210 S19 Pro+ Hydro machines, drawing just over 1 MW of power. The container costs a cool $110,000, and with 210 units the total comes in at three million dollars.

The benefits of hydro (or antifreeze) cooling are that optimal running temperatures are easier to maintain. Hydro containers can withstand exterior temperatures of -25 to 40 degrees Celsius (-13 F to 104 F) because the system maintains fluid temperatures through a central chamber/tower. Containers have other fancy features like mist cooling for summer and air-cooled miner heat recirculation for winter. Also, the HK3 advertises AI recognition, leak alarms, GPS, an emergency stop button, and a video surveillance system.

Ironically though, the testing of Bitmain’s Hydro miners was carried out in Xinjiang at the beginning of the year. This coal-powered region banned mining in June of 2021 due to ‘environmental concerns’. So for some, this legitimizes rumors that Chinese miners may be working together with their government, and never really ceased operations.

MicroBT released plans to manufacture the WhatsMiner M50S and M53S at the Bitcoin Magazine Conference in Miami earlier this month. Although, they did not have a prototype to display like Bitmain did in Dubai, and instead gave a futuristic presentation.

In their recent talk they made claim that the stability of their machines is incomparable to other manufacturers, and most miners would concur. The company’s next generation models employ Samsung 5nm chips, and the M50S will deliver around 15% higher efficiency than the M30S++. Like other bitcoin mining manufacturers, WhatsMiner produce equipment in Southeast Asia, which reduces importation costs for some miners.

Yet, due to backorders, the chip shortage, and Covid, machines are not in stock. Here’s what WhatsMiner advertise:

Like other manufacturers, MicroBT are focusing on ESG principles. They promote that the heat recycling properties of their new M53S water-cooled miners make them carbon neutral. The M53 machines have a new design which is like a computer server, and they can be overclocked up to 30% from their 226 TH/s specs.

Canaan is the only mining equipment company with a multi-foundry strategy. They have partnerships with TSMC, Samsung, and SMIC, and also make their own AI chips.

Whilst they continue to fulfill a backlog of customer orders, they have yet not released any next gen. models. The machines offered on their website use 7/8nm SMIC and Samsung chips, and are as follows:

But, at the Bitcoin Conference earlier this month Canaan did announce that a next generation miner, the A1266, will soon be available. It will reach 100 TH/s, with an efficiency of 35 J/TH. The company also shared plans to focus on solar-based bitcoin mining, and their pledge to work with miners using clean energy sources going forwards.

Since January 2021, Canaan have also made immersion cooling solutions. Up to 90 A1246Is can be housed in one of their immersion modules. Immersed machines can run noiselessly and be overclocked by up to 38%. Additionally, the liquid coolant prolongs a machine’s lifespan by eliminating dust, and reduces corrosion caused by electrostatic particles.

Lastly, Canaan are established in China, but report that they are also working to improve their worldwide presence and after-sales services.

At the ISSCC semiconductor conference in February, US-based Intel unveiled their first generation bitcoin mining chip. Intel claims that they have been working on the technology for a number of years, and first filed patents in 2018. They report that their motive to enter the Bitcoin mining equipment industry is because they expect it to grow by $2.8 billion in the next three years.

Intel’s first chip iteration, the so-called ‘Bonanza Mine’ (BZM2), was used in a prototype rig which reached 40 TH/s at 3600W, with an efficiency of 90 J/TH. This was not very spectacular. However, their new ‘Blockscale’ ASICs were just announced this month. These second-generation ASICs can reach up to 580 gigahash per second (GH/s) per chip, with a power efficiency of 26 J/TH. Unique features of the Blockscale include on-chip temperature- and voltage-sensing capabilities, as well as support for up to 256 integrated circuits per chain.

The Blockscale chip’s level of efficiency is exciting, as it should put Intel on par with industry-leaders Antminer and WhatsMiner. A new gen. miner currently has around 300 chips per unit. So to estimate what an Intel miner spec would be, we can take one chain of 256 chips * 580 GH/s = 148,480 GH/s. This converts to a potential of around 148 TH/s per unit, at 3848W, and 26 J/TH. Pretty impressive.

Furthermore, Intel will only work with companies that align with their ESG goals. This is favorable to institutional miners who also aim to be sustainable for investment and financial purposes. Intel and its American customers will also be in good stead if the SEC passes a proposed regulation, requiring publicly traded companies to report GHG emissions and reduce their climate impact.

Shipment of Intel’s Blockscale ASICs will start in Q3 of this year, but pricing hasn’t been disclosed. Argo Blockchain, HIVE Blockchain, GRIID Infrastructure, as well as Block (formerly Square) are the first customers. Although Intel promise to provide a reference hardware design and software stack to jump-start a customer’s rig development, these mining companies will need to manufacture machines themselves. On the positive side, this will reduce mining rig prices for institutional miners. On the negative side, getting a machine from conception to execution can be difficult. For example, leading manufacturers had access to 5nm chips for several years before releasing a viable product.

Innosilicon are a Chinese company that make reliable bitcoin mining machines, and have strong relationships with SMIC, and previously Samsung. But at the moment they only have older gen. T3+ machines for sale on their website. They do not manufacture any new generation rigs.

EBang was once one of the industry leading bitcoin mining manufacturers. Unfortunately, EBang have not released any new gen. machines for a few years. Still, their older generation Ebit E12, and E10.6 are for sale of their website. These machines both use 10nm chips. But as they are shipped from China, import fees may apply.

New bitcoin mining manufacturers are coming onto the scene. KOI Miner recently released SHA-256 machines. They have four different C16 models available on their website, ranging from 86-112 TH/s, with efficiencies as low as 29.5 J/TH. Models are available on a limited basis, and cost between $5,800-$9,800 dollars. The company’s address is in Shenzhen, China, next to Foxconn. A few different reviews are found on YouTube, but as they are so new, the reliability and the quality of their products remains uncertain.

iPollo are another new company that released bitcoin mining machines. The B1L is the company’s first BTC miner. It hashes 60 TH/s, with an efficiency of 50 J/TH. iPollo advertise that a second iteration, the B1, will be coming soon. The B1 will have specs up to 100 TH/s and 29.5 J/TH, putting it on par with the Antminer S19 Pro and Whatsminer M30S++. The company are based in Singapore, and also make Grin and Ethereum miners. But again, we cannot confirm the quality of their BTC rigs as no reviews exist yet.