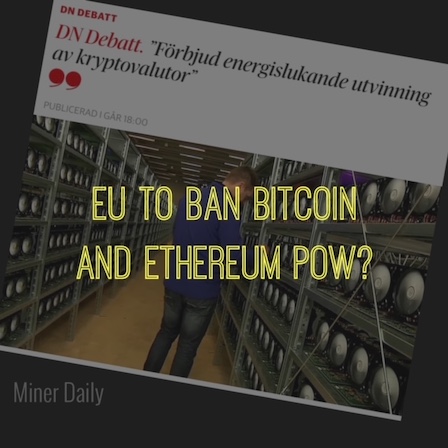 Here we will lay out their argument, then follow with a rebuttal debunking their claims.

Swedish Finance Inspectorate Erik Thedéen, alongside Björn Risinger of the Environmental Protection Agency, claim that the ability to meet the Paris Climate Agreement is threatened by cryptocurrency production. They want to set an example for the EU to ban Bitcoin’s proof of work starting in Sweden. They propose these immediate actions:

The team admit there is short-term risk that PoW miners will be driven to locations with fossil-fuel power sources. This could potentially lead to higher overall PoW emissions. But regardless Sweden and the EU should pave the way for achieving the goals of the Paris Agreement.

Now, let’s break down this article in more detail and try to set the record straight.

To state that other digital or cryptographic currencies are ‘comparable’ to Bitcoin is a misnomer. Bitcoin’s PoW facilitates a decentralized system which weeds out bad actors through consensus rules. PoW miners are financially incentivized to play by the rules. The energy that PoW expends secures the system by making it financially impossible to attack the network, ‘roll back’ transactions, or complete double spends. Alleged ‘sustainable’ coins use centralized databases, have initial coin offerings, and do not have as robust or as secure of a design.

Bitcoin is also permission-less and borderless. Bitcoiners can send remittances or payments overseas without seeking permission, without being forced to pay exorbitant fees. This is only made possible by PoW miners and nodes which run audits on new data through consensus rules without the interference of third-parties. Transactions are completed in minutes, compared to bank transfers which can take days. Banks also freeze out the less fortunate who do not meet ID or fixed abode requirements, or close customer accounts arbitrarily. In fact there are over 37 million Europeans who lack access to financial services due to exclusion. Bitcoin is inclusive, Bitcoin fixes this.

If the Swedish government enacts PoW regulations industrial miners like HIVE Blockchain, Genesis Mining, and Northern Data would be affected. Combined these companies contribute 1% of Bitcoin’s total hash rate, and a half of a percent of the Ethereum network.

In the coming years HIVE and Genesis have made plans to expand in Northern Sweden, but there is also growing competition for clean electricity thanks to the country’s heavy industrial production. In particular so-called ‘green steel’ and ‘green hydrogen’ are picking up steam.

Based on hash rate distribution from CBECI and new generation ASICs, Swedish miners consume only about 0.5 TWh per year, whilst fossil-free steel production alone is set to consume 15 TWh per year by 2026. Contrarily, the DN article claims that Swedish PoW miners consume 1 TWh, double our estimate, implying that older generation machines are in operation. This is not the case.

The truth is that modern data centers like those found in the Nordics only utilize newer ASIC models in order to maximize operational efficiency and profit margins. Generally bitcoin miners send older generation machines to locations with cheaper, dirtier energy sources. This is because older machines cost more per terahash to run, and the instability of these regions may put a miner’s assets at risk. Thus it is not sustainable to ship newer, expensive models to third-world countries.

For decades Sweden has relied on regional nuclear and hydroelectric power. Yet, the government has announced that 2,000 small dams will be shut over the next 15 years in order to protect water sources, wildlife, and the environment. And, as discussed earlier, nuclear plants are being decommissioned due to similar habitat concerns.

Albeit shutting down smaller regional hydro plants centralizes and traps hydroelectricity in the north of the country. The Nordic region is already producing an oversupply of 30 TWh annually of renewable power. This surplus energy cannot be stored or transported effectively to Sweden’s southern regions. Thus, despite planned wind and solar power expansion projects, Sweden’s future energy supply will likely not meet demand. To fill the gap Sweden is burning biomass which is controversial as it causes deforestation and environmental damage. They are also importing coal-power from abroad.

From the DN article it is clear that PoW miners are being scapegoated for Sweden’s mismanagement of their energy supply. PoW miners use less than a half a percent of the total supply of wind and hydro per year, often surplus. But Thedéen and Risinger argue that by allowing large-scale cryptocurrency mining, Sweden’s renewable energy will not be enough for fossil-free steel, large-scale battery production, and electrification of the transport sector. Their argument is factually impossible given the proportion of electricity used in PoW versus domestic industrial production and transportation.

Furthermore it is ironic that Sweden’s attitude of utilizing imported fossil-fuel energy shares the same sentiment as Thedéen’s and Risinger’s remark that PoW may move to dirtier power sources if western countries force them out. In other words, the problem is not solved, only shifted abroad. What type of example does this really set?

Thedéen and Risinger also believe that decentralized cryptocurrencies have no real societal benefits. They cite that crypto payments foster money laundering, terrorist financing, and extortion. But expert sources find that only 0.34% of cryptocurrency transactions are associated with illicit activity. Furthermore, P2P currency adoption has grown 880% in 2021 at the same time as crypto crime is reducing, see below.

Comparatively speaking, money laundering in the fiat market accounts for 2-5% of the global GDP, or $800 billion dollars. Also, the International Consortium of Investigative Journalists found that major banks play a crucial role in organized crime, terrorism, fraud, and political corruption. Prominent banks funnel dirty money through their system despite repetitive penalties, settlements, and threats of prosecution.

Amusingly, the DN article which calls for the EU to ban Bitcoin’s proof of work also cites that the higher the BTC/ETH price, the greater amount of miners and CO2 emissions, referencing Digiconomist. Digiconomist’s sensationalized claims about continual hash rate growth do not take into consideration the dynamics of Bitcoin.

The truth is that as the BTC price climbs, more miners join the network, and the difficulty increases. Increased difficulty pushes down a miner’s earnings per terahash, and bumps less efficient machines off of the network. Thus, the BTC network is more energy efficient over time.

The DN article also compares the “emissions of BTC and ETH” to 100 million round-trip flights between Sweden and Thailand, but obviously the two are not comparable. Again, many bitcoin miners use surplus energy and 100% renewables in Sweden and in the EU. Additionally, we know that the Bitcoin network’s total share of fossil-fuel mining reduced with the closure of thermal mining in China, and will reduce further with the Kazakh restrictions.

Lastly, the DN article cites that PoW emissions need to be stopped now, and renewable energy needs to be used for climate change in socially important activities. Thedéen and Risinger believe that renewable energy should only be allowed to be consumed where it does the most good for society as a whole.

Apparently the fraction of a percent of Sweden’s energy used for Bitcoin’s PoW is not ‘justifiable’. Howbeit server space with subsidized electricity for social media sites, for example, is more beneficial to society. Additionally, over the past couple years the energy consumption of electric vehicles has increased from about 24 TWh to 40 TWh per year at a rate of 4,000 kWh per car. How is this energy more justifiable than PoW mining? If we are actually concerned with the environment, how about we stop driving cars, and instead use public transport, ride a bike, walk, or just stay at home?

As miners we believe that it would be better for societal benefit and for the environment if officials work with PoW miners, rather than exile them and claim victory because the activity is no longer in their back yard. Miners should be allowed to compete fairly for energy without calumny by virtue signaling environmental crusaders.