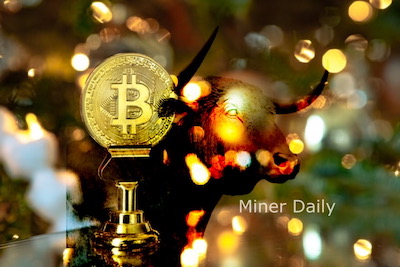 Only two weeks have passed in 2021, and Bitcoin has managed to break several records. Bitcoin miners are turning a good profit. Some are expanding operations. But miners are at the edge of their seats as price volatility persists.

Only weeks into 2021 several records were broken. These include:

Bitcoin’s dominance in the coin market also surpassed 70%, not seen since late 2019.

Since the start of the new year bitcoin miners have been riding the bull. In the past two weeks miner earnings surpassed 30¢/TH, and bitcoin’s price topped 40k. Bitcoin miners also profited from a backup in the mempool. Up to 80,000 transactions were in queue last week and fees went up to $15 per transaction. But with a difficulty adjustment to an all-time high of 20 trillion on January 9th, and a record hashrate over 150 EH/s, it looked like miner earnings would be threatened.

Yet, despite the difficulty rise, and a price correction to $33K, miners are still gaining around 22¢/TH. This is significant because the last time earnings were above 20¢ was September 2019, when BTC was only at $8k. Check out the interactive chart below to see bitcoin mining stats so far this month, data sourced from BitInfoCharts, Blockchain, and BTC.com.

With all the hustle and bustle ASIC prices have surged upwards, in some cases trebling in value. Hardware pre-orders have pushed back delivery dates for new machines until the fall of 2021. Thus, miners have been buying up older generation machines to maximize their terahash earnings while they can.

It can also be assumed that many older generation models are back in the game, including shelved Antminer S9s from last summer. The network hashrate gained about 10 EH/s in the course of the past two weeks. To put this into perspective, 10 EH/s is equivalent to about 700,000 S9s, or 90,000 S19s.

But as bitcoin miners know, what goes up must come down. If the BTC price drops, difficulty rises more, and/or the hashrate stays high, such older generation machines may run in the red again. Furthermore, for those who purchased miners at a premium of up to $8000/machine, or have utilized financing with interest rates between 10-20%, dire straits may lie ahead.

If profitability goes down, ROI periods become extended and bankruptcy could ensue. This was seen after BTC prices rose from 8k to 17k, then back down to 8k, in a matter of months between November 2017 and January 2018. As a result mines were shuttered or abandoned en masse in both the US and China the following year. Here is one example:

Miners in western China reported a small electricity tariff rise last week, although likely not related to the BTC price increase. On the other hand, residents in Central Washington in the States were ready for a bitcoin mining surge, placing their utility crews ‘on watch’. Power company workers have been instructed to report suspicious activity like high power bills, 24-hour exhaust fans, or signs of make-shift farms in basements or sheds.

Luckily, tighter measures have warded off unwanted miners in Washington this bull run. It seems the region will not repeat 2017-2018, when miners flocked in to take advantage of hydropower below 3¢/kWh. Bootleg mines caused power consumption to exceed three times normal limits, resulting in line overloads and outages for residents. Residents are still bitter, and the six remaining farms in the region are only allocated 5% of the power supply.

Bitcoin miners hope the bull run continues, as 2020 was a tough year with earnings as low as 6¢/TH. But miners are watching the market with trepidation. Difficulty is set to rise in two weeks by at least 10%, setting yet another all-time high of around 23 trillion. Also bitcoin’s pump can just as easily switch to a dump, as short term investors cash out winnings.

Seasoned bitcoin miners know not to spend all of their profits at once. When asked how they are utilizing current profits, one anonymous miner replied: “I’ve bought some secondhand miners and plan to pay a month or two electricity in advance. A bear market could be around the corner.”

Another miner joked, “I’m waiting for the next bear market, when liquidations of large mining farms in the USA will cause newer generation models, like the S19, to become available on the secondhand market.”

Perhaps we all win and bitcoin’s value will continue to climb. If the hashrate stagnates due to delayed shipments of ASICs, profitability may stay in the 20¢/TH range for months to come.

Good luck miners. Hold onto your seats, and continue to enjoy the ride 🙂