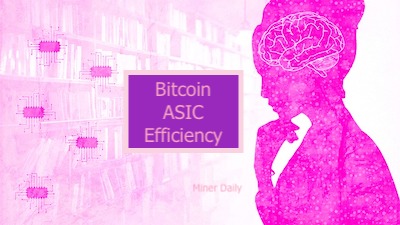 Bitcoin ASIC evolution is stalling and some claim that Moore’s law is dead.

However, despite hindered microchip upgrades energy efficiency and hashing capabilities of ASICs continue to improve. Such engineering feats combined with a limited availability of miners means that Bitcoin’s proof-of-work power requirements are also slowing pace.

This is the second of a three-part series profiling Bitcoin’s PoW energy consumption. Here we take a closer look at Moore’s law, ASIC efficiency, and microchip manufacturing and delays.

However, critics argue that Moore’s law is dead. For example Intel took five years to advance from 14 nanometer (nm) chips to 10 nm. Also, over the past three years bitcoin mining ASICs stagnated at TSMC’s 7nm and Samsung’s 8nm.

Despite Moore’s law being broken, hardware, software, algorithmic, or other engineering feats provide additional energy reduction. For example bitcoin miner manufacturers managed to double hashing capabilities in the past three years, from 50 TH/s to over 100 TH/s, using the same 7-8nm chips.

Excitingly, TSMC estimate 3nm chips will be released in 2022 which could reduce power use by 56% compared to the 7nm. Yet microchip product release and large-scale ASIC production are two very different matters, discussed later on.

Interact: Single out a series by clicking on the legend above. 2022 are predictions only.

Bitcoin miners mint coins, add coinbase transactions to the blockchain, and maintain the public ledger. To do this bitcoin miners consume a lot of energy. But, as the Green Bitcoin Theory assumes, mining hardware manufacturers continue to release machines which consume less electricity per TH.

This alongside ASIC production delays has reduced the rate of growth of Bitcoin’s PoW energy consumption. If an additional 1 million miners join the network this year as predicted, Bitcoin’s PoW will consume an additional 20 TWh by 2022. This 36% increase is the same rate of change as last year (+35%), opposed to pre-2018 exponential growth.

A similar concept can be seen in the big tech industry as shown below. Regardless of Moore’s law not being actualized energy trends remain steady in the face of increased workload and internet traffic. This is due to improved cooling, software, network infrastructure, etcetera.

But why is it so hard to squeeze more hashing power into ASICs? Let’s find out.

What are Microprocessing Chips?

ASICs, or application-specific integrated circuits, were first invented by Robert Noyce in 1967. These engineered silicon squares have a system-on-a-chip (SoC) design. All circuits, transistors, and electronics interconnect on each microchip. They act as the brains of bitcoin mining machines. Microchips may also go by the name die, integrated-circuit, or semiconductor.

Chip size is expressed in nanometers (nm), or billionths of a meter. For comparison your hair grows at about 1 nm per second. Although, confusingly, nm size refers purely to gate size and chip generation and does not accurately portray design or logic technologies. For instance a well designed 7nm may outperform a poorly designed 5nm chip in energy use per terahash. Thus alternative rating systems are purposed but not yet widely adopted.

How are Bitcoin ASICs Made?

Because microprocessing chips are so complex they take up to 4 months of chemical processing to create. To begin silicon is grown in sterile conditions and then sliced into large circular wafers. Photolithographic and metal layers are then printed and laid onto this silicon base. As microchips get smaller more can fit onto one wafer. Thus as Moore’s Law stipulates production should become cheaper over time.

Viable chips are separated from wafers, pressed into housing cards, and mounted onto hash boards. Bitcoin ASIC hardware manufacturers use hundreds of microchips per miner model, and most contain three hash boards. Below is a comparison of two different generation Antminer hash boards. Note that the S9 board has more cards of lesser efficiency than the S17.

Economists calculate research efforts to uphold Moore’s Law have risen by a factor of 18 since 1971. This strain has resulted in the number of top quality ASIC foundries shrinking from twenty-five in 2003, to just three today. Of these three, efficient mining hardware manufacturers only use two: Samsung in South Korea, and Taiwanese TSMC in the Republic of China.

Once the microchips are in the hands of miner manufacturers tight tolerances are still difficult to execute. Building and coding hardware, software, and cooling systems is tedious. For example Bitmain and Canaan reported incoming 5nm miners in 2019, and MicroBT announced 5nm rigs in 2020. Still none are available.

Additionally, serious players like Apple take priority for foundry floor space over bitcoin miner manufacturers. This has resulted in backorders and limited supplies of newer generation ASIC hardware over the coming year. For example leading manufacturers Bitmain are sold out until the fall, and MicroBT apparently for the next two years. Thus Canaan is turning to other systems like immersion cooling to further miner efficiency.

To combat high demand from several industries Samsung is building a new fabrication plant in Texas, and TSMC in Arizona. But construction will take 2-3 years followed by an additional year of preparation. Also it costs over $16 billion to construct a state-of-the-art semiconductor fab, a cost rising 13% per annum.

Lastly, silicon wafers contain some percentage of impurities. This is due to logical or cosmetic errors, such as oxidization, dust entrapment, or scratches.

Whilst other technology companies use only the purest specimen chips on devices like mobile phones, bitcoin mining hardware manufacturers are rumored to use otherwise wasted chips to create reduced price models like the Antminer T series. Although this cannot be confirmed. Yet, if true, bitcoin ASIC fabrication may be more sustainable than comparable industries.

In summary Moore’s law is dead because the timeframe of multiplying transistors on microprocessing chips is lengthening to > 2 years and becoming more costly. Moreover delays in ASIC production exist due to competition and painstaking R&D. This reduces the capacity of new miners joining the network.