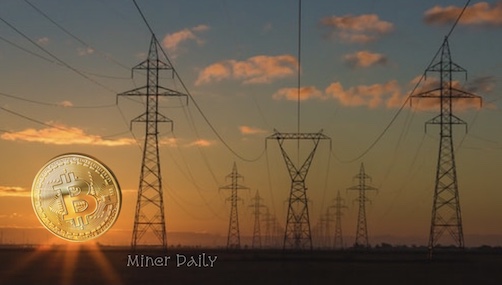 How much power does it take to mine a bitcoin? In this assessment we find that an average of 143,000 kWh of energy is required to produce one bitcoin. Our method to discover the amount of energy it takes to mine a bitcoin uses data from relevant ASIC models, network size, and current miner profitability.

We also calculate the bitcoin production rate and use it to find how much energy the entire network consumes. We discover that Bitcoin’s network uses an average of 128,248 MWh, or 128 GWh of electricity per day in order to produce 900 bitcoin. But this estimate is always changing alongside hash rate size and other factors.

The best ASIC miner on the market is currently Bitmain’s Antminer S19 Pro 110 terahash per second (TH/s). This model houses a couple hundred TSMC 7nm microprocessor chips. It consumes 3250 watts (W) power per hour with an efficiency of 29.5 W/TH. But, one machine alone takes about 3 years to produce one bitcoin.

Thus to discover how much power it takes to mine a bitcoin, we need to consider how much energy the entire network uses rather than just one unit. Let’s use a similar method to the one we used in our investigation of ‘how much it costs to mine a bitcoin‘ to achieve this.

How much power does it take to mine a bitcoin with S19 Pros?

According to mining pool data it takes about 122,000 TH/s over twenty-four hours to create ~1 bitcoin at today’s BTC price, network size, and difficulty level.

And, by simple division we find out that 122,000 TH/s is equivalent to 1,109 S19 Pros at 110 TH/s each. So to find out how much energy these 1,109 ASICs require, we multiply the amount of machines by their kilowatt (kW) specification over one day of mining.

Hence, it requires 86,509 kWh to produce one bitcoin with S19 Pros. This is the same as 86.5 megawatt-hour (MWh) or 0.0865 gigawatt-hour (GWh). Read more about electricity unit conversions here.

But Bitcoin’s network is not only made up of S19 Pros, lesser efficient machines exist. Accordingly, the actual power demand to produce one bitcoin is slightly higher than this first prediction. Let’s try other bitcoin miner models which represent the entire network population.

How much power does it take to mine a bitcoin per ASIC model?

Below we show the model name, terahash, kilowatt, and efficiency specifications for bitcoin mining’s most popular hardware. We also find the number of ASICs required to hash 122,000 TH/s which is equal to one BTC. Lastly, we take the product of the amount of ASICs to mine one BTC and the kW spec over 24 hours. This provides the estimated kWh per BTC for each miner type.

It is important to understand that Bitcoin’s variables are volatile. For example, the hash rate was 185 EH/s before the bitcoin mining bans, which is +35% more than today. So this means that in April the network used over a third more electricity to create a bitcoin as it did in August of 2021.

Furthermore, it is difficult to know exactly how many of each ASIC model is currently running, or the accurate market share of manufacturers. So these are assumptions.

But thanks to improvements in the energy profiles of bitcoin miners alongside microprocessor chip advancements, hardware uses less energy per terahash to produce bitcoin over time. Yet manufacturing bottlenecks limit the release of new machines, keeping older generation hardware on the network.

If we want to work out how much energy the entire Bitcoin network consumes each day, we need to do some groundwork. First we must find out the current rate of bitcoin production.

The block pace is the rate which PoW miners discover new blocks through a hashing puzzle. The amount of time it takes PoW miners to find a block adjusts automatically over time by the difficulty level. The target rate of block discovery is every 10 minutes. Thus, the average block pace is one block per 10 minutes. This is equivalent to 6 blocks per hour, or 144 blocks a day.

Although, keep in mind that the block reward diminishes over time. In the year 2024 the block reward will shrink from 6.25 to 3.125 bitcoin in what is known as a halving event. Halvings occur every four years, read more about miner trends here.

Using the variables described above, we find that the rate of bitcoin production is 37.5 BTC per hour for the next three years (until the 2024 halving). This means around 900 bitcoin are produced per day, and 328,500 are created per year. See our calculations below.

Bitcoin’s self-auditing difficulty adjustment always reorientates the block pace to 6 per hour. This occurs every 2016 blocks, or about every 2 weeks. This mechanism keeps the system working like clockwork without mediation. It also incentivizes miners to use the most energy efficient machines to keep ahead of their competition. As hash rate grows, bitcoin mining difficulty becomes harder.

Next we find out how much power the network uses daily. To do this we take the product of the average amount of kWh it takes to mine a bitcoin, and the rate of bitcoin production.

From our previous calculations we know that at an average efficiency of 48.7 it takes around 142,498 kWh to produce one bitcoin. This is equivalent to 142 MWh or 0.142 GWh.

How Many Bitcoin can a Power Plant Produce?

To put this into perspective a typical nuclear power plant produces 1000 MW electricity. This equals 24,000 MWh per day, or 24 GWh. Whereas a large-scale energy provider like the Three Gorges Dam in China spits out a maximum capacity of 22.5 GW. This amounts to 540,000 MWh per day, or 540 GWh.

So, in theory, a typical power plant could mint up to 171 bitcoin per a day, and Three Gorges Dam could create four times the maximum of 900 bitcoin per day. See how we did this below.

Today the world has around 62,500 power plants. When you consider that one large power plant could run the entire Bitcoin network four times over, Bitcoin’s energy consumption seems less threatening.

Furthermore, the world produces over 460 TWh of energy per day, or 460,000 GWh. Thus, Bitcoin uses 0.03% of the world’s energy per day. We also know that much of the energy bitcoin miners use is stranded, or otherwise wasted energy. So in the big scheme of things, how much power it takes to mine a bitcoin is negligible.

Why is Bitcoin scapegoated for its energy consumption? Perhaps because financial institutions and world leaders fear losing their Cantillon privileges. Richard Cantillon’s theory from the 1700s states that the beneficiaries of newly printed money are the wealthy. Eventually money trickles downs to the populace, but working people pay a higher price. This creates inflation and an uneven distribution of purchasing power.

Today things are more extreme than what Cantillon observed. Hedge funds, private equity, and bankers benefit immensely from the ‘brrrrrrr‘ of money printers. Rich rent-seekers live off of the interest paid by lower lying citizens on the money-chain, without bringing any real benefit to society. Bitcoin fixes this by limiting the coin supply to 21 million, and not favoring a certain social class.

But, Bitcoin miners have access to the newly printed money? Yes, but this money is not all profit, miners must use their earnings to stay competitive. This is because the distribution of coins is in the form of miner rewards which is based on game theory. Game theory does not care about your social-class privileges.

Additionally, Bitcoin allows a greater amount of privacy than current financial institutions. Whereas Big Brother must always know what the inferior populace is doing in order to control them.

In conclusion, the amount of energy it takes to mine a bitcoin is estimated to be between 86,000 – 286,000 kWh. And Bitcoin’s network consumes around 128 GWh a day in order to produce 900 bitcoin. But remember that variables like hash rate, BTC price, and miner earnings are dynamic which affect results.

The beauty of Bitcoin’s design is that it has the ability to self-regulate to ensure its block pace stays constant and miner’s earnings are competitive. But will the network grow forever as the BTC price increases and the hashing capabilities of ASICs advance? No, network growth has a limited capacity.

Several people cite that Bitcoin’s network will grow linearly year-on-year based on historical data. However, due to negative feedbacks and exogenous limitations this is not the case. Bitcoin trends are nonlinear because it is a complex system.

In fact, despite continuing BTC price increases miner profitability diminishes over time thanks to negative feedbacks. See in green below.

Further, despite microchip advances which lower ASIC efficiency profiles and increase profit margins, the overall cost and energy required to mine a bitcoin will rise over time. This is because of a combination of circumstances which can be termed as the ‘limits to growth‘ of the network size.

Limits to growth include network difficulty – as more miners join the network the difficulty increases which makes it harder to mine a bitcoin. This reduces a miner’s profit and increases the cost to mine a bitcoin. Additionally, electricity tariffs will rise over time as fossil-fuels are phased out and the dollar’s value decreases with inflation. Also, regulations add extra fees. For example, from January 2022 Kazakhstan will introduce a miner tariff per kWh, and in Canada bitcoin miners who don’t use clean energy must pay for their carbon footprint. Lastly, diminishing miner rewards due to halvings will cause the base production price of a bitcoin to rise every four years. Although, BTC price increases should compensate in part for rising production costs.

Therefore, we believe that Bitcoin’s network is entering the slowed growth phase shown in the logistics growth model above. In the future we believe that the network size may peak and then reach a relative equilibrium or diminished growth. Of course, we could be wrong. What do you think? Share your thoughts.

Bitcoin and Renewables, A Miner’s Observations