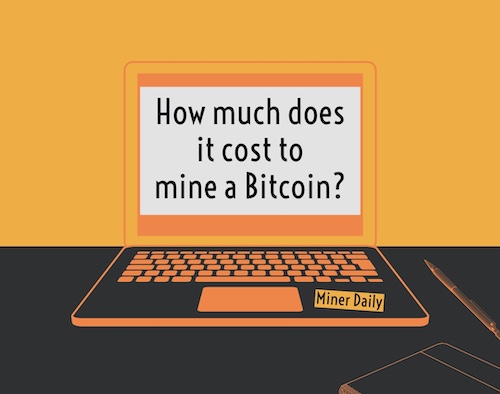 Bitcoin is a Proof-of-Work cryptocurrency, thus coins have an intrinsic value due to the cost for miners to create and transact them.

Using this logic, the base value of a bitcoin may be interpreted as a miner’s operating charges. Miners run their gear 24/7 and their fees include: ASIC hardware price, power consumption, repairs, freight, import costs, and exchange rates for BTC to fiat to pay bills.

With so many variables, several appraisals of how much it costs to mine a bitcoin may be computed. As no one way is perfect we provide two simplified methods. First, we find that the average production cost of a bitcoin using various ASIC models is about $9,000. Secondly, we find that the approximate average cost to mine one bitcoin considering hardware investment is around $13,000.

A combination of these methods indicate that,

the current average cost to mine a Bitcoin is ABout $11,000 USD.

1. The 24h Production Cost to Mine a Bitcoin

Based on a sample of ASIC models which represent the current hashrate demographics, the average production cost to mine one bitcoin is about $9,000. The following is our assumptions, methods, and results.

In this first calculation, commonly available ASIC models are referenced but machine costs are unaccounted. Moreover, we assume miners pay between 5¢-6¢/kWh for electricity on a global scale, year-round. Lastly, we presume pool fees cancel out transaction fee earnings, and all values are rounded up.

Also, Bitcoin itself is dynamic. The BTC price, hashrate amount, and difficulty change regularly. These all affect miner profitability and the cost to mine a bitcoin. Yet, in order to limit complexity, nonlinear variables are ignored.

Hashrate Required to Mine 1 BTC

First, we take a shortcut and use pool data to estimate how many TH/s it takes to mine one bitcoin. As seen below, it takes about 146,010 terahash to mine one bitcoin. Further, Bitcoin’s value at the time of this calculation is $32,812, the network hashrate is 143 EH/s, and earnings are 22¢/TH.

Around 3 million miners make up the Bitcoin Network. But this is just a rough estimate, as not all ASIC manufacturers release unit sales data. Moreover, Bitmain Antminers represent the bulk of the hashrate. In the past, Bitmain sales equivocated to three-quarters of the hardware industry, followed by MicroBT, reported to constitute as much as one-third.

For the purpose of this investigation, we assume the Bitcoin hardware industry market shares are: Bitmain Antminer 50%, Canaan Avalon 15%, Innosilicon T-Series 15%, and MicroBT Whatsminer 20%. Thus, the ASICs listed below represent these proportions. Furthermore, older and newer generation models provide a range of miner efficiency for each manufacturer.

Derived from the preceding hashrate information, this table shows how many of each ASIC model it requires to mine one bitcoin. Then, based on electricity tariffs, the base 24h production cost of mining one BTC per model is given.

According to these calculations, we find that the average cost to mine one bitcoin using this method is $9,173 USD. Next, we consider the machine purchase price.

2. The ASIC Lifetime Cost to Mine a Bitcoin

In this second assessment we find that the average cost to mine a bitcoin is about $13,000, considering the cost of the hardware and expected lifetime. Below we discuss methodology, assumptions, and results.

As a rule, the value of mining hardware follows miner profitability and customer demand. ROI equals around one year profits at the time of purchase. Yet, due to the recent bull run, corporate interest in bitcoin mining, and limited ASIC production, miners are scarce.

As before, a sample range of ASIC models represent the network’s miner population. Earnings are 22¢/TH and the BTC price is $32,812. This equation does not take into consideration hardware repair costs, or electricity tariff rises over time. Furthermore, this equation does not consider current ASIC delivery delays, which can span several months.

In the sake of limiting complexity, this method neglects the following nonlinear dynamics. The network difficulty, which adjusts by-weekly (every 2016 blocks), and has risen an average of 2% each cycle this past annum. The BTC price, which has increased by four times in the past year, from $8,000 to well over $30,000. Additionally, miner earnings per TH which have quadrupled in the past year. Finally, the total network hashrate which nearly doubled in 2020.

Based on halving cycles, we assume mining rigs have an average lifetime of 4 years.

Cost to Mine 1 Bitcoin with 1 ASIC

Based on daily profits, we find that it takes one newer generation ASIC around four years to mine one BTC. As this timeframe is nearly equivalent to the machine’s lifetime, we simply add the base production price of one BTC to the hardware purchase price. Though, this is just a guideline as many unknowns can happen during such a long time window.

Thus, the average cost to mine a bitcoin, taking into account hardware purchase price, is $13,274 USD.

To derive at our final cost to mine a bitcoin we average the results from our two methodologies, arriving at a cost of about $11,200 USD. Finally, based on our findings and current BTC prices,

the cost to mine a Bitcoin represents 34% of the BTC price.

Bitcoin’s Dominance and why History Matters