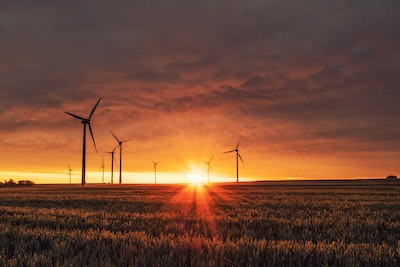 The Green Bitcoin Theory believes that Bitcoin’s energy use is trivial in comparison to coin price or other industries. They postulate that bitcoin mining will become a major contributor to global renewable energy projects and R&D in the next 5 years.

Here, we discuss our interpretation of the Green Bitcoin Theory. Then we provide considerations of the dynamics of the hardware industry and Bitcoin’s energy consumption. This article will be the first of a series of three, profiling Bitcoin’s current energy use.

The Green Bitcoin Theory was released in 2020 by the Frankfurt School Blockchain Center. The authors are Philipp Sandner, Daniel Wingen, Stefanie von Jan, and Andreas Straub.

The miners to the right of the white curve produce bitcoins at high costs. This puts them at risk of being pushed off the network. Miners to the left produce coins with higher profit margins. This secures their market edge.

Companies with access to low-cost electricity and more efficient mining rigs will drive higher OPEX companies out of business. Therefore, it may be reasonable to argue that this dynamic results in an overall shift to cleaner energy sources, visualized by the skewed yellow line.

The group is working on empirical evidence to back the theory, see the video at the end of this article.

In most circumstances, renewables like water, wind, geothermal, natural gas, and solar, are cheaper to produce than conventional fossil-fueled energy sources. As a result, bitcoin mines, renowned to chase the lowest-cost electricity, are 76% clean power backed.

For instance, Russia, China, Iceland, and North America are prodigal with hydroelectric bitcoin mines. Combined these five countries mine around 80% of all bitcoins.

Whilst the Green Bitcoin hypothesis lays out a hopeful outlook for cleaner bitcoin mining companies, lionhearted and independent bitcoin miners do not give up operations when faced with lower profitability. They seek other options.

For these players, power sources are dirtier and cheaper than renewable options. Additionally, acquisition of older, inefficient ASICs provide miners with lower entry price to the market. Yet, operations are risky due to heists, seizures, or difficulties maintaining the hardware.

So, in certain geographical locations, the cost of mining a bitcoin using fossil fuel is cheaper than using renewables. This results in a slightly different x-axis, until global decarbonization is achieved. However, non-renewables still only represent a small amount of the network at each end of the distribution spectrum.

Furthermore, bull-bear market cycles and bottlenecks in ASIC manufacturing run ‘efficient operations’ out of business. This is because in a bull market new actors purchase mining gear at premium prices. Some large companies rely on financing. When profitability declines, companies may be pressured to liquidate or go bankrupt.

Lastly, delays in ASIC production and efficiency improvements hamper companies from executing timely equipment upgrades to stay ahead of the curve. As a result, the Bitcoin network has slowed growth, and secondhand sales of less efficient machines have flourished. This results in slowing growth of Bitcoin’s total energy consumption, which will be examined in the next article.

So, we must consider that bottom feeders, who consume larger amounts of dirtier energy to mine bitcoins, may not disappear from the network until global decarbonization is actualized. But, this group accounts for small portion of the network and bitcoins mined. Additionally, inefficient machines are used on a larger scale during market bull runs when bitcoin mining profitability increases considerably.

Stay tuned for the next article where we mine deeper knowledge of ASIC efficiency and the manufacturing industry. ⛏ The third article will investigate data center mining, and China’s shifting energy demographic.