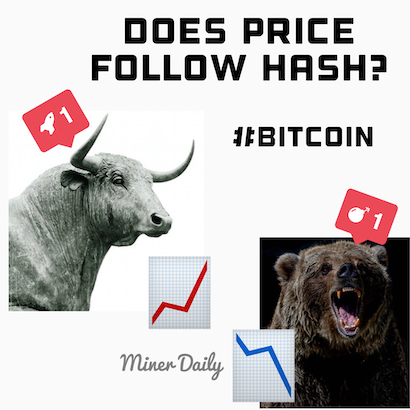 Bitcoin’s price correlates with its hash rate under certain circumstances, but not as a rule. Thus, we don’t subscribe to the the price follows hash theory. Here’s why.

Willy Woo, among others, promote that Bitcoin’s price follows hash rate. To support the hypothesis Woo cites that both the BCH hard fork on November 13, 2018, and the Xinjiang data park shutdowns on April 26, 2021, triggered BTC hash and price drops.

Keiser also says, “The constant 10-minute emission schedule of #Bitcoin is the lure that will always attract miners – even acting irrationally – that pushes up hash rate with price following” (2020).

Both Woo and Keiser infer that bitcoin miner activity affects price. This is not wholly true.

Correlation does not imply causation.

Perhaps individuals like Keiser and Woo use the perceived correlation of price follows hash in prediction models. However, this type of confirmation bias could lead individuals to make risky decisions.

Here we lay out some evidence, and hope to supply more insight into miner movements and market reactions.

Miners Exit and Join the Network

Miners leave the network due to profitability or energy constraints, which are not always correlated with price changes. Older machines may reach breakeven when profits are low, and policies or natural disasters may suspend hashing.

Hash rate is also stunted due to manufacturing bottlenecks. To illustrate this, the graph below shows that bitcoin’s hash rate has followed a linear growth curve this year whilst bitcoin’s price has followed more of an exponential trend.

Bitcoin miners join the network at a faster pace when bull runs ensue and profits increase, as well as during the Sichuan wet season when excess hydropower allows running costs to decrease. Although, in the long-term, yearly Sichuan migrations may fade due to drought, energy competition, and mining bans.

Thus, there is no reason to believe that the seasonal hash rate increase last year was the cause of the late-2020 bull run. Rather, last year’s hash rate growth followed the BTC price increase. Older generation machines came out of storage and newly purchased miners were 2x more powerful than in 2019. Machine production also increases during bull runs.

This increased interest in bitcoin mining causes more energy to be used, which can then trigger regulations to be put on miners to cap the growing proof of work network. Similar crackdowns, kWh tariff increases, and regulation changes happened the last bull run in 2017-2018, in Washington State, Quebec, Sweden, Norway, and some provinces of China.

In April, the mempool backed up considerably due to hash rate drops. Mempool backups extend transaction times and increase fees. This phenomenon may temporarily discourage buyers and cause bitcoin’s price to go down.

In the following image you will see that a backlog of transactions appear when hash rate suddenly drops, because the difficulty adjustment only occurs every 2016 blocks, or about every two weeks. Difficulty increases or decreases in order to make mining more or less difficult, which syncs the block discovery pace to the desired rate of one every 10 minutes.

When hash rate becomes more decentralized after this year’s China crackdowns, the occurrence of this type of sudden hash rate drop and mempool backlog should lessen. Especially since the western Chinese province of Xinjiang, which has now banned bitcoin mining, was thought to house over a third of the hash rate.

As we understand from farm owners, most of this hash rate has already, or will move to Kazakhstan, Russia, and North America. Due to current bans and relocations, total hash rate may not climb over 200 EH/s this year, as previously predicted.

We believe bitcoin’s price is most affected by market psychology.

Both the Xinjiang temporary shutdown of mines in April, as well as the 2013 BCH fork, caused people to react negatively towards Bitcoin and sell. In April, Xinjiang bitcoin mines underwent inspection following the Huobi coal mine accident, which highlighted their use of fossil-fuels and centralization. Media alongside Elon Musk attacked proof of work mining.

On the contrary, the second Xinjiang shutdown in June caused hash rate to drop and prices to climb. In the week following the final shutdown, hash rate fell 13%, price increased by 17%. We believe that this price increase was likely because investors felt that the lost hash rate would allow the network to be ‘more secure through decentralization, and use greener energy’.

So, to put this into perspective, the equivalent of ~200,000 ASIC miners left the network, yet bitcoin rose by +$5,000. Sorry Woo and Keiser, price does not necessarily follow hash.

Corporate interest and increased bitcoin adoption have likely fueled the 2020-2021 price climbs. In turn, this pushes more miners to join the network because the USD profitability per terahash increases.

Additionally, Plan B’s stock to flow model suggests price increases are locked-in post four-yearly halvings. The miner reward halving event of 2020 created a new degree of coin scarcity, driving up the BTC price. Plan B predicts the BTC price could reach six-figures by the end of the year. Thus, miner profitability and hash rate should follow suit, external factors like availability of machines and power limiting.

Hash and Price Rates of Change

Finally, we investigate the daily and monthly rates of change of bitcoin’s price and network size.

You can see below that the daily changes of price and hash are not correlated. Sometimes hash (in blue) drops, followed by price (in green); sometimes vice versa. Other times both hash and price go up or down simultaneously.

To further illustrate this, we zoom out and take the monthly average change of hash rate and bitcoin price. Again, you will notice that the curves do not mirror one another, thus there is no guaranteed correlation.

In conclusion, hash rate changes do not necessarily proceed BTC price changes. Price and hash are not correlated in most instances, markets decide.

Hash rate changes are due to profitability changes which arise from: network size, bull-bear markets, difficulty adjustments, halvings, and the availability of miner hardware. Regional policy changes, migrations, a large production of miners being tested by manufacturers, or energy supplies may also suddenly increase or decrease the hash rate.

In most instances hash rate does not drive price as Woo and Keiser suggest, rather it tends to follow price. This is because price increases equate miner profitability increases, and more join the network as a result. Contrarily, price decreases cause decreased profitability, which can drive lesser efficient machines off the network.

Sudden hash rate drops and mempool backups should ease with the new China bitcoin mining bans and hash rate decentralization. Yet, bitcoin’s hash rate may not be ‘greener’ in the interim, as some Sichuan miners move to fossil fueled operations. Unfortunately, the energy in Sichuan will then be wasted until the grid is built out, which will take several more years. Sichuan was Bitcoin’s cleanest mining destination because mines connect directly to hydropower dams without intermediary transmission lines or grids, whereas grids use fossil fuels in some capacity to balance and transmit electricity loads.

How Much Does it Cost to Mine a Bitcoin?

Bitcoin’s Dominance and why History Matters