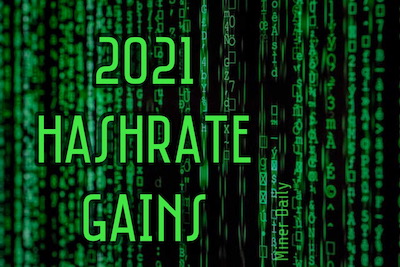 Currently the bulk of this year’s hardware orders are destine for the United States. So, what does this mean for network distribution? Will North America and China compete for the lead, or will China’s status quo remain?

In this analysis, Miner Daily finds that North America has little potential to overtake China by year’s end. Unless a lot more investors from the region jump into Bitcoin mining.

On Jan. 25th, Carbon Chain Value and Wu Shuo Blockchain hosted a dialogue which tackled the topic of ‘bitcoin mining in the 2021 bull market’. Contributors were: Ao Gang who is the V.P. of Chip Technology, Wang Hongyong who is the Exec. Director of Yibang International, Jiang Zhihua, a Partner/COO of ViaBTC, and finally, Yao Wanni who heads Fire Coin Mine Operation.

In the meeting, farm operator Yao Wanni remarks that whilst Chinese investors continue to sink money into bitcoin mining, North American interest in mining has catapulted thanks to ASIC financing. “The whole mining industry in North America is booming” Yao states.

Exactly How Many ASICs?

At present, at least 200,000 units will arrive in North America by 2022. Additionally, future or unpublicized deals may increase this figure over the next eleven months.

What are the exact figures? Listed below are North American (USA/Canada) companies expecting ASIC deliveries over the course of this year. Data collected by Miner Daily from manufacturer blogs and media sources on Jan. 29, 2021.

Mind you, Wang warns that both TSMC and Samsung have no more production capacity for bitcoin mining microprocessing chips. Additionally, ASICs from manufacturers are sold out until at least the fall.

What do the manufacturers have to say about this? Not much…

At the moment, MicroBT notifies customers of potential shipment delays due to Corona virus and other factors on their website. Whilst Bitmain released a statement last week which ensures deliveries will not be affected by Co-Founder Jihan Wu’s amicable exit, with no reference to chip shortages or delays. Further, Canaan promises to deliver A1246s throughout the summer without acknowledging any delivery hindrances.

Wang Hongyong suggests that ASIC manufacturers may sell up to 800,000 more ASICs this year, and Chinese mining operations are always expanding. For example, 500.com, a Chinese sports lottery firm, announced plans to acquire Bitmain and MicroBT machines from an unnamed seller. Furthermore, demand for newer generation mining rigs in hydropower regions in China is very strong.

will North America and China Compete for #1 Hasher?

First, let’s get our bearings by recalling the current network status. According to the Cambridge Center for Alternative Finance Bitcoin Mining Map (April 2020), top network players are: China 65%, North America 8.5%, Russia 7%, Kazakhstan 6%, and Iran 4%. These five countries account for 90% of the April 2020 hashrate, which was a maximum average of 115 EH/s.

If this unaccounted 35 EH/s from April to January is equally distributed between top contenders who we know received the bulk of new ASICs in 2020, the following global distribution is implied (values rounded up):

Based on the following theoretical analysis, North America could steal the lead of the BTC hashrate from China in 2021…. But only by purchasing at least an additional 630,000 ASICs, which is highly unlikely.

Under all conditions China continues to lead Bitcoin’s geographical miner distribution, except for Scenario 2. In the second simulation, North America increases ASIC supplies by five times the amount currently on order, thereby stealing the #1 position from China.

From our investigation we find that in order for USA and Canada to take the hashing power lead over China, they must secure a minimum of 63 more EH/s this year. This equates to an extra order of 630,000 ASICs, with an average of 100 TH/s, costing nearly $4 billion dollars. Thus, it is most probable that China continues to possess the majority of Bitcoin’s mining power in 2021.

But, if the rumors of a 200 TH/s machine from MicroBT are true, it could be a game changer for BTC hashrate gains in 2021. In this case, North America would require a delivery of 315,000 of the mystical M50S machines to dominate Bitcoin’s network by 2022.

5nm Bitcoin Mining Machines, where are you?