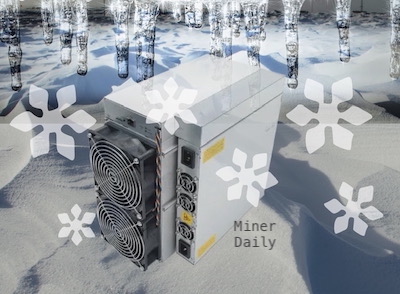 Despite best efforts, interior climates of mining farms may be difficult to control in periods of extreme heat or cold. This winter was no different. Bitcoin mining facilities in China faced frigid temperatures, causing machines like the Antminer S17 Pro and Antminer S19 to automatically switch off hashboards. This safety feature is actually beneficial. It acts as a self-preservation mechanism for the hardware during unsuitable running conditions.

If you were unaware, a large proportion of Bitcoin’s hashrate flows in from China. In fact, 20% of Bitcoin’s hashrate originates from the western province of Xinjiang. Temperatures here this January dipped to below -20 Celsius (-5 Fahrenheit). Furthermore, humidity was over 80%, making it feel even colder.

As mentioned, cold or heat spells can cause Antminers with temperature safety features to stop working. As far as aware, these models include the S9, L3+, T9, T17, and the S17 and S19 series.

If a machine pulls in air through its fans below -5C (23F), it automatically goes into ‘protection mode’ and shuts down the corresponding hashboards whose sensors report low temps. The same goes for temperatures which are too high. Sensors reading above around 85C (185F) also trigger hashboard shutdowns. Refer to this guide for the suggested degree ranges per model.

Bitcoin mining farms usually have large wall-mounted fans which are essential to cool ASICs down during warm summer months. Typically these humongous fans pull cooler outside air into the building, drawing it through the shelved mining rigs, then up and out through ventilation shafts in the mine’s roof. In the winter, most mines only heat themselves by the thermal output of their own operating rigs.

During cold winter months large amounts of snow collected on the roof or around the farm structure could inhibit correct air circulation dynamics. Additionally, water condensation combined with low air temperatures may cause ice build-up on a farm’s fans.

Getting the Cold Antminer Back Online

When “chilled to the metal”, Antminers need some coaxing to get back online and achieve full hashing capacity. Below is a summary of the steps to succeed in preheating an Antminer. Although, please refer to Bitmain’s own guide for a detailed account of maintaining bitcoin mining machines in low temperature areas.

An Antminer S17 Pro 56 TH/s has lost hashing capacity during a cold spell this winter. The mining machine operator force drops from 56 TH/s to nearly halve, at 35 TH/s. It looks like a hashboard may have failed. See the graphical image of the hashing speed from the pool’s data.

After further inspection, the Miner Status page shows that some of the printed circuit board (PCB) sensors are near to zero degrees. The kernel log reports a warning message, something like: “PCB min temperature (-6 C) is too low, <= -6 C”.

Thus, two of the three Antminer S17 Pro hashboards are not performing as expected due to the cold. The preheating startup method gets them back online.

Steps to Preheat an Antminer ASIC

1. Direct restarts are avoided in low temperatures. Check for loose heat sinks or chips if the miner was recently moved.

2. Redirect the hot air expelled by the machine back onto itself, by repositioning the unit’s angle on the shelf. Incoming and outgoing air in the vicinity of the hardware is also checked for obstruction.

3. If after a time the machine is still underperforming, it may be shut down and moved to an area with a temperature over 20C (68F), until the internal temperature has risen to at least 5C (41F). One farm operator reports to Miner Daily that ‘heating tables’ are sometimes used to evenly warm up miners.

Note, Bitmain stresses that equipment producing extreme heat concentrated on one area, like fan heaters or blowdryers, should not be used. Such apparatuses could potentially damage ASIC components or loosen soldering. Humidity should also be minimal in and around a Bitcoin miner during running. Thus, preheating helps to expel unwanted water vapor.

4. Still having issues? Contact Bitmain or a repair center.

Units which have just arrived at a farm need preheating as well as checks for loose parts or damage. In colder regions, Bitmain recommends starting the machine mid-day when outdoor temperatures are at a maximum. Further, it is vitally important that the firmware, IP, and pool settings are updated before initial boot-up.

Bitmain’s protection mode is a great tool for Bitcoin miners. So long as temperature sensors are working correctly, this mechanism helps to prolong an ASIC’s lifetime through ensuring the hardware runs safely. Remember to attend to ventilation issues before the miners. Avoid cold restarts by preheating machines.