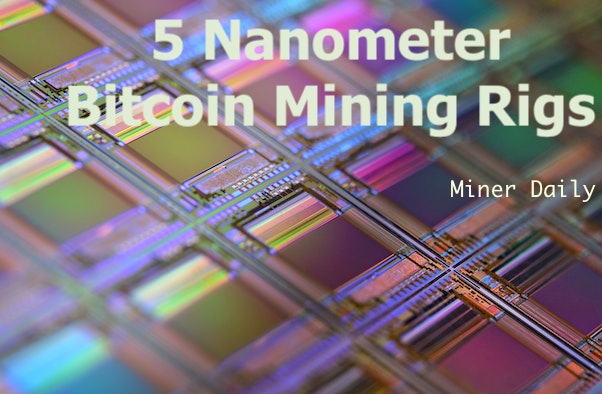 For the past three years 5nm bitcoin mining machines have been an urban legend.

Additionally, a general manager of Samsung’s semiconductor foundry overzealously reports 3nm and 5nm chips were fabricated for bitcoin mining since Q1 of 2018. Such chips have yet to hit the SHA-256 miner market.

Right now the 7/8nm process remains the pinnacle of the bitcoin mining industry. Seven and eight nanometer chips from TSMC and Samsung are in Antminers, WhatsMiners, and AvalonMiners respectively. AvalonMiner are also thought to use Chinese-based SMIC microprocessing chips in some of their models. However, things may change in 2022 as we enter a new era.

After years of anticipation and a breach of Moore’s law, it was no surprise that TSMC and Samsung began production of 5nm microchips in their fabs in 2020. Although, this new production capability was only thanks to a shift in the semiconductor industry.

In the past, semiconductor engineers employed by fabrication plants were responsible for the creation of leading-edge nodes. Today single-customer companies like Apple, Qualcomm, and Bitmain push the R&D envelope.

Apple announced it would implement its new M1 and A14 chips in most of its products over the coming years. Its 5nm chip fabrication currently accounts for over half of TSMCs total production capacity.

To cope with increased demand from various industries, both TSMC and Samsung are building new fabs in Arizona and Texas. Though, construction and preparation will take some years.

In the spring of 2021, news broke that Bitmain placed an order with TSMC for production of 5nm chips for their next generation Antminers. These new generation machines are expected to be released by the end of the year. The company will ramp up production in 2022.

Bitmain’s new mining rig could be up to 40% more efficient than their current S19 Pro and S19j Pro models which advertise an efficiency of 29.5-30.5 joules per terahash. We expect the model will be named S21, as only odd numbers are used.

See below on the interactive graph of how bitcoin mining ASIC chips have evolved over time. 2022 is just a prediction. A step down in node process size reduces power requirements and heat production, improving overall performance and efficiency (J/TH).

Moreover, it is great news that Bitmain’s production is not stalled, as TSMC were rumored to have barred Bitmain from receiving more chips from February onwards. This was due to alleged poaching of TSMC and MediaTek engineers by Bitmain.

In the near future we assume that both MicroBT and Canaan will reciprocate efforts, presumably using Samsung as their 5nm chip supplier.

Before discovering Bitmain’s order for 5nm chips, some miners were under the impression that the S19j Pro model utilized 5nm chips. Yet, this seems incorrect.

Miner Daily attempted to fact check such claims by reaching out to a respected Antminer distributor and to Bitmain. We found no evidence to suggest that Bitmain’s S19j bitcoin mining machines are locked into a mining pool, or that they are 5nm. Bitmain revealed to us that they keep their chip sizes secret and were unable to comment.

Update June 11, 2021: We were able to receive feedback from Wu Blockchain, he stands by the fact that S19j models are 5nm. He told us that ‘any miner in China, they know S19j is 5nm, if we question this, it only means we don’t know the industry,’ citing his article. We replied that the chip size is ‘top secret’ according to Bitmain. We also pointed out that the efficiency of an S19 Pro (29.5 joules/terahash) is better than the S19j Pro (30.5 J/TH), indicating that S19j is not a better chip.

In conclusion, we believe that all Bitmain’s S19 and S19j models use a 7nm chip, and a new Antminer S21 model with an upgraded 5nm chip is soon at hand. However, we can’t be certain.

So then, how high will 2022’s hash rate climb? Could it double to 400 EH/s? Or will power restrictions, foundry bottlenecks, and/or regional regulations hamper network growth?