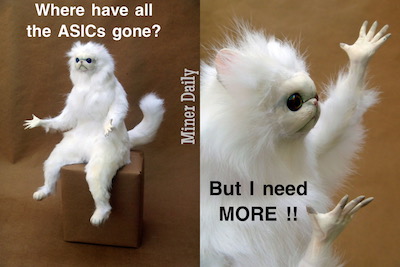 Now that the BTC price is hitting record heights, where are all the bitcoin mining machines? According to manufacturer websites many of the market-leading ASICs are currently unavailable. This is because they sold out, or are only order-able with long lead times.

For example, thanks to a huge purchase order by Core Scientific, all of Bitmain’s Antminers are out of stock until at least July 2021. All of Innosilicon’s stocks are empty. Moreover, Whatsminer’s M31S is only available from April 2021. Additionally, due to quick sales, Canaan’s new 1246 model is unobtainable until May 2021.

Waiting up to six months for delivery of a mining rig is tedious. Long delivery times equivocate lost earnings, consequentially increasing machine ROI time by up to 50%. Furthermore, predicted shipment dates are no guarantee. In the past, bitcoin miners have experienced extended delays post-order.

Let’s dive into the bitcoin mining machine industry, and discover how ASICs are created, and where bottlenecks may affect the dynamics of supply and demand.

What are Bitcoin Mining Machines?

ASIC is an acronym for application-specific integrated circuits. NG Zhang, co-founder of Canaan Creatives, first introduced ASICs in 2013. They evolved from their Bitcoin mining predecessors: CPUs, GPUs, and FPGAs.

ASICs only perform a single task with their specialized integrated circuits, whereas home computers have generalized integrated circuits to perform multiple tasks. In other words, ASICs only mine bitcoin using the SHA-256 algorithm, whilst CPUs and GPUs can run whole operating systems. The CPUs of ASICs are contained in microprocessing chips, similar to those found in mobile phones and cars.

Microprocessing chips are also called application-specific semiconductor circuits. These custom etched silicon wafers are the ASIC’s brain. The size of this chip, expressed in nanometers (nm), largely determines performance ability and power requirements of machine models. That is, the better the nano processing chip, the greater the miner’s profit margin in relation to operating costs.

The spawn of these chips was a remarkable feat. It was self-organized and funded by Bitcoin enthusiasts, rather than corporate elites. Microprocessing chips once costing several millions to produce, were created comparatively on a shoe string budget (Bitcoin Wiki).

Over time microchips have become smaller, yet more power efficient because of increases of cores. Such advances allow faster calculations using less electricity, reducing heat signatures. For example, the Antminer S17 has one-hundred-forty-four 7nm chip cards on its three hashboards, compared to its predecessor the S9, which has one-hundred-eighty-nine 16nm chips. The S17 hashes 56 trillion times per second at 40 watts per hash, the S9 just 13.5 trillion at 100 watts per hash.

There are two main foundries in the chip making sector: Taiwan Semiconductor Manufacturing Company (TSMC), and Korean-based Samsung. Competitors like Intel and others are mere shadows in the face of these giants. When is comes to bitcoin mining machines, there is a clear duopoly of chip producers.

Because miner efficiency is a function of chip quality, the relationship between TSMC or Samsung, and bitcoin hardware manufacturers, is crucial for the development and success of ASIC models. Chip design, research, and production set-up are done in conjunction with both parties. Thus, finely tuned and costly fabrication processes of semiconductors make it practically impossible for ASIC manufacturers to switch chip supplier.

ASIC manufacturers are at the mercy of the semiconductor industry.

Additionally, the TSMC and Samsung foundries allocate limited production capacity to ASIC chip creation and research. They must instead meet orders placed by major chip consumers like Apple Inc, Nvidia, Huawei, and Samsung Electronics, just to name a few. Limited microprocessor creation capacity results in a strain on the supply of bitcoin mining machines to customers. Preordered ASICs may be held up or unavailable because manufacturing lines are waiting for these scare but vital components.

Leading contenders in the ASIC hardware market are based in China. The largest companies are: Bitmain, MicroBT, Canaan, and Innosilicon. In case you are confused, Bitmain produces Antminer, MicroBT produces Whatsminer, Canaan makes Avalon, and Innosilicon makes the T-series. Combined, these companies hold the majority share of the multi-billion dollar hardware industry, lead by Bitmain who controls over fifty-percent.

The inertia of ASIC’s technological advances has lead to a reduction in production costs, and increased Bitcoin network hash. This is exemplified below in a comparison of miner efficiency to the hashing capacity of the BTC blockchain.

Yet, recent years have seen growth rates of mining chip improvement slow, and market leaders like Bitmain loose some of their competitive edge. Further, companies that make bitcoin mining machines are busy expanding business overseas, competing for IPOs, and investing in large scale corporate mining ventures in the background.

Key ASIC manufacturers are also devoting more effort to the development of artificial intelligence (AI) machines. This phenomenon is in part due to the fact that China has its mind set on becoming the world’s primary AI innovation center by 2030 (Forbes). Perhaps the ASIC industry has lost some of the enthusiastic spark which fueled progression in earlier days?

In the beginning several ASIC manufacturers dominated the market, but were shady and untrustworthy. It was not uncommon for companies to pre-mine with machines already purchased by customers, delaying delivery times arbitrarily.

Due to this unstable environment Bitmain saw its opportunity to take the reins. In 2014 they offered stellar products with transparent service to customers. In particular, Bitmain’s S7 and S9 were by far the most efficient machines of their time.

Eventually Bitmain’s design cycles began to lengthen. Chip bottlenecks, management turnover, and fierce competition ate away at their market share. It started when the S9 designer Yang Zuoxing left his directorial role at Bitmain in 2017, to start Bitewei, later MicroBT.

MicroBT’s Whatsminer models instantaneously jumped to second in command of the hardware industry. In retaliation, Bitmain pursued criminal charges against Zuoxing for embezzlement and intellectual theft. Ultimately litigation was dropped, and Bitmain’s hardware patent revoked by Beijing courts in 2018 (Yahoo!). As a result, 2019 Whatsminer deliveries were hampered.

The repercussions of distrust and transfers of power spilled into the Bitmain boardroom. The heads of Bitmain, CTO Micree Zhan and Co-Founder Jihan Wu, battled out a dramatic struggle in 2019. This disagreement over control of the company and manufacturing processes pegged employees against one another. The dispute unintentionally hurt loyal customers who waited patiently for postponed deliveries of S19s (Decrypt).

Long lead times for ASICs are nothing new. The 2019 internal issues at both Bitmain and MicroBT lead to customer deliveries being deferred by three months. This was followed by the unforeseen Covid pandemic. Quarantines pursued for months, resulting in stalled production of chips and hardware, and obstruction of ship outs. Lastly, the mid-2020 halving caused major profitability losses. Investors in bitcoin mining took a step back as ASIC values temporarily dropped.

But, since the end of the 2020 Chinese hydro season, BTC prices have sustained record highs. With ever-increasing crypto adoption rates, the world wants more bitcoin mining machines. Miner FOMO and new players in the industry, like Core Scientific, have amplified delays. To put it simply, demands for ASICs are greater than supply.

As a causal result machine prices are going up. The Antminer S19, for example, has nearly doubled in price in the last few months. Furthermore, older generation machines like the S17 have become a hot commodity on second-hand Asian markets. Efficient secondhand models, which were on the brink of extinction post-halving, are now nice substitutes for inaccessible newer generation models.

BTC price increases and matured Bitcoin adoption is causing major investors to take interest in bitcoin mining hardware. This causes a tragedy of the commons, where newer generation ASICs are difficult to get ahold of for the average miner. Older generation models are having a resurgence on the secondhand market.

On a positive note, inaccessible bitcoin mining machines mean more profits for existing hashers. BTC price gains are happening quicker than rises in the network hashrate. This allows miners to profit from more earnings per terahash, as well as enlarged transaction fee shares…. Until the next bear market comes.

Regardless of fluctuations in miner earnings in the future, bitcoin mining should remain a profitable industry. So long as localized restrictions against mining and electricity tariffs remain stable, the network should regulate itself through difficulty changes to keep miners incentivized, as Satoshi intended.

Lastly, future breakthroughs of the nanometer threshold may increase availability of microchips, accelerating ASIC production and availability. But could the Made in China 2025 initiative threaten the industry, causing Chinese manufacturers to keep ahold of ASICs for domestic consumption? Or, are ASIC manufacturers too preoccupied with AI advancements, allowing ASIC technology to further stall?

Only time will tell.